The Underwood Stakes marks the unofficial start of the Melbourne spring carnival and always attracts top-line gallopers.
As proud partners of the Hyland Race Colours Group 1 Underwood Stakes at Caulfield we reflect back over the race’s proud history and invite you to nominate your Top Three winners of all time.

The Hyland Racecolours Gr 1 Underwood Stakes run over 1800meters has been won by many of Australia’s greatest racehorses. The honour roll of winners includes So You Think, Northerly, Octagonal, Bonecrusher, Jeune, Rubiton, Rain Lover, the immortal Phar Lap and recently It’s a Dundeel grinding down the champion Atlantic jewell in one of the highest rating races of the 2014 racing season.

The Underwood Stakes has long been a reliable guide to the big three races of spring, past winners have gone on to win 12 Yalumba Stakes, seven Caulfield Cups, 15 Cox Plate winners and has produced two Melbourne Cup Winners in Jeune (1994) and Rain Lover (1969).
Since 2000, Elvstroem (2004), Mummify (2003) and Northerly (2002) have completed the Underwood Stakes-Caulfield Cup double 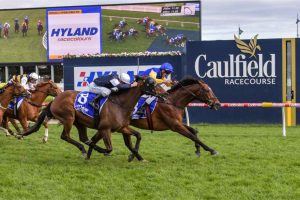